In Part 1, we looked at the awkward situation created when we introduce callbacks to handle even a single asynchronous operation into an otherwise simple set of function calls.

As a quick review, have a look back at the code we started with, the messy end result when using callbacks, and the things we’d like to fix in order to get back to sanity:

A Promise (aka Future, Delayed value, Deferred value) represents a value that is not yet available because the computation that will produce the value has not yet completed. A Promise is a placeholder into which the successful result or reason for failure will eventually materialize.

Promises also provide a simple API (see note below) for being notified when the result has materialized, or when a failure has occured.

Promises are not a new concept, and have been implemented in many languages. While several implementations of the Promise concept in Javascript have been around for a while, they have started to gain more popularity recently as we start to build bigger, more complex systems that require coordinating more asynchronous tasks.

(NOTE: Although there are several proposed Promise API standards, Promises/A has been implemented in several major frameworks, and appears to be becoming the defacto standard. In any case, the basic concepts are the same: 1) Promises act as a placeholder for a result or error, 2) they provide a way to be notified when the actual result has materialized, or when a failure has occurred.)

In the case of an XHR Get, the value we care about is the content of the url we’re fetching. We know that XHR is an asynchonous operation, and that the value won’t be available immediately. That fits the definition of a Promise perfectly.

Imagine that we have an XHR library that immediately returns a Promise, as a placeholder for the content, instead of requiring us to pass in a callback. We could rewrite our asynchronous thisMightFail function from Part 1 to look like this:

Now, we can return the Promise placeholder as if it were the real result, and our asynchronous thisMightFail function looks very much like a plain old synchronous, call-and-return operation.

Taking Back the Stack

In a non-callback world, results and errors flow back up the call stack. This is expected and familiar. In a callback-based world, as we’ve seen, results and errors no longer follow that familiar model, and instead, callbacks must flow down, deeper into the stack.

By using Promises, we can restore the familiar call-and-return programming model, and remove the callbacks.

To see how this works, let’s start with a simplified version of the synchronous getTheResult function from Part 1, without try/catch so that exceptions will always propagate up the call stack.

Now let’s introduce the asynchronous thisMightFail from above that uses our Promise-based XHR lib.

Using Promises, getTheResult() is identical in the synchronous and asynchronous cases! And in both, the successful result or the failure will propagate up the stack to the caller.

Notice also that there are no callbacks or errbacks (or alwaysbacks!) being passed down the callstack, and they haven’t polluted any of our function signatures. By using Promises, our functions now look and act like the familiar, synchronous, call-and-return model.

We’ve used Promises to refactor our simplified getTheResult function, and fix two of the problems we identified in Part 1. We’ve:

But, what does this mean for callers of getTheResult? Remember that we’re returning a Promise, and eventually, either the successful result (the result of the XHR) or an error will materialize into the Promise placeholder, at which point the caller will want to take some action.

What about the Caller?

As mentioned above, Promises provide an API for being notified when either the result or failure becomes available. For example, in the proposed Promises/A spec, a Promise has a .then() method, and many promise libraries provide a when() function that achieves the same goal.

Now, let’s look at how the caller can use the Promise that getTheResult returns using the Promises/A .then() API. 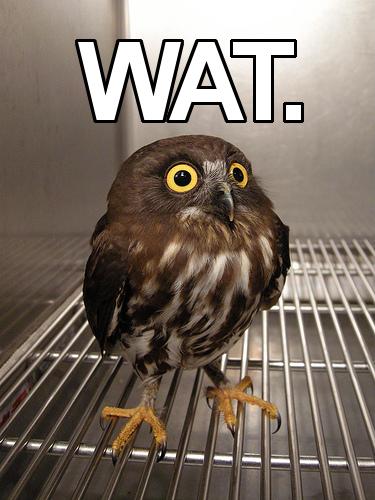 (Image from The Meta Picture)

Wasn’t the whole point of this Promises stuff to avoid using callbacks? And here we are using them?!?

In Javascript, Promises are implemented using callbacks because there is no language-level construct for dealing with asynchrony. Callbacks are a necessary implementation detail of Promises. If Javascript provided, or possibly when it does provide in the future, other language constructs, promises could be implemented differently.

However, there are several important advantages in using Promises over the deep callback passing model from Part 1.

Second, the Promise API standardizes callback passing. Libraries all tend to place callbacks and errbacks at different positions in function signatures. Some don’t even accept an errback. Most don’t accept an alwaysback (i.e. “finally”). We can rely on the Promise API instead of many potentially different library APIs.

Third, a Promise makes a set of guarantees about how and when callbacks and errbacks will be called, and how return values and exceptions thrown by callbacks will be handled. In a non-Promise world, the multitude of callback-supporting libraries and their many function signatures also means a multitude of different behaviors:

So, while one way to think of Promises is as a standard API to callback registration, they also provide standard, predictable behavior for how and when a callback will be called, exception handling, etc.

Now that we’ve restored call-and-return and removed callbacks from our function signatures, we need a way to handle failures. Ideally, we’d like to use try/catch/finally, or at least something that looks and acts just like it and works in the face of asynchrony.

In Part 3, we’ll put the final piece of the puzzle into place, and see how to model try/catch/finally using Promises.